Diamond City: A city within a building

Diamond city shopping center is being constructed in Minsk, the capital of the Republic of Belarus. The total area of 53 000 square meters in four floors host both offices, shops and a hypermarket. The name “Diamond” was chosen to represent the building’s actual shape.One of the project’s main distinguishable features are its special concrete elements that form diamond like features over the entire building. The use of BIM helped to efficiently achieve such challenging shapes and accuracy of both geometry and structural detail. The connections and reinforcing details of the elements and bearing structures formed the overall diamond shape of the building.

2D simply was not enough

In the beginning of the project, the participants worked in 2D environment. Soon it was clear to everyone that continuing so would not ensure a successful outcome with such a difficult and intricate architecture. Gradually, BIM was selected as a solution to be used in this project, and in the end of the project and during assembly phase Tekla model become an irreplaceable working tool. During the process, also i.e. Tekla BIMsight, Staad, and Frame Analysis were used.

Tekla Structures was used from beginning of preliminary design to finishing of the detailed design, including quantity tables, detail drawings, and shop drawings. In addition a software environment for Belarus standards was created, and additional non-standard insert details were used as custom components.

In this international project, precast concrete elements were mainly produced in plant located in Lithuania, but also in Estonia and Latvia. Each plant and country had its own specifications and requirements to shop drawings. Tekla Structures made the job a lot easier than it would have been with traditional CAD design.

The stakeholders have been very satisfied with BIM tools. Contractor and cost estimators had really good input with much better visualization than usually. With the success of the project, the designer (AS CES) wishes to convince the clients of the benefits of perfect prior planning, which would help to prevent poor performance, especially in designing building. 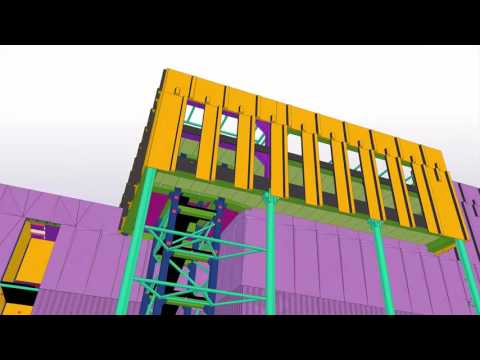