The Clarion Hotel Helsinki is located in the new Jätkäsaari urban investment district in the central West Harbour area of Helsinki. Encompassing an area of 13,800 m2, its two window-clad towers are linked by a transparent footbridge and glass elevators. The highest of the towers is 78 meters above sea level. There are 425 rooms, a stunning rooftop pool, the Sky Room, a conference centre for up to 1,000 people and a Kitchen & Table restaurant conceptualized by Marcus Samuelsson. The hotel's design is the work of Tarkela Davidsson Architects.

The project consists of 15,000 structural elements in total including 3,700 elements with design, fabrication, logistics and erection planned, 2,009 shop drawings and 348 GA drawings. The foundation structures of the building designed by Norconsult were erected before the design of above-ground structures. This had an enormous impact on the selection of the design scheme as the reaction forces had to correspond to the reactions presented by Norconsult.

Precast concrete and steel structures were fabricated in Lithuania by JSC Markuciai and shipped to the building site with trucks and cargo ships from Riga. The building site bordered dock on one side and the busy street on the other. Therefore, a decision was made to erect structures straight from the ship. This meant that the processes of design, fabrication, logistics and erection had to be planned with great precision.

The hotel was ceremonially opened in November 2016.

Fully designed in a BIM environment by an international team

All the projects designed by Concretus Designers are developed in the 3D environment, including Clarion Hotel Helsinki. Project proposal was designed according to client’s drafts of the project, which were imported into Tekla Structures environment as a reference. This phase included deciding about the most important structural solutions, dividing the building into separate elements, calculating the financial proposal, and finally solving the logistics.

All elements, a total of 8,150 tons, were transported by trucks from Markuciai factory in Lithuania to the harbor of Riga, Latvia. Some of them were put into five ships and delivered by sea directly to the building site in the harbor of Helsinki. The rest of them were transported by trucks all the way to the site. The parameters for design and fabrication dates, assembly shipping dates and type of transportation, erection dates, and erection sequences were added for each element in the 3D model. In order to control and manage the information and to avoid and measure the risk of being late, this data was shared with all the project members in order for all participants to follow the processes at the same time. To do this, a macro tool was created to generate reports to Excel document of all the necessary information, including planned design, fabrication, logistics and erection dates, erection sequences. This allowed visualizing and evaluating the risk of delay and adjusting the design schedule.

The biggest challenge was the complex geometry of the building with two separate towers. They are both translated and rotated with respect to each other and linked by composite bridges. Modeling involved two grid systems, one for each tower, as well as complex bridge-to-tower joints with 112 springs modeled in total. Post-tensioning systems for the walls was a unique solution of the project that required 1,828 bar couplers in total. Special components and quantity list were developed, too, and a total of 1,080 frameworks were modeled for a complicated floor diaphragm reinforcement. Mounting order was further affected by joint complexity. A maximum of 104 embedded details were modeled in one internal wall element because of the huge forces.

Winder concrete stairs contained 84 different reinforcing bar types. Another macro tool was developed in order to avoid detailing every bending. The macro exports the data of the rebar directly to the factory to avoid repetitive design and detailing. The usage of components developed by Halfen and Peikko helped working in the 3D model, thus saving time and resources.

In order to achieve perfect quality of drawings, the project team developed another fully automated tool that warns the user if an element is missing information or if an error has occurred. A special model-checking tool was developed to find out missing parameters. For example, if an element or part may not have a floor assigned to it or it may not have been added to any element as a sub-assembly, this tool gives a warning.

The Clarion Hotel Helsinki project was fully designed in the BIM environment while collaborating with an international team of Finns, Estonians, Norwegians and Lithuanians. The project was supervised by HENT Ab. In order to see how different models from different parties interfere with each other, the project used a compatibility form: the IFC models were uploaded into the Tekla environment to execute the clash test.

Problematic situations including screenshots and descriptions were then to be uploaded into an administrative form.

Despite its complexity, physical distance of the project parties and strict requirements of other markets, 3D modeling and BIM made this project predictable and easily manageable. 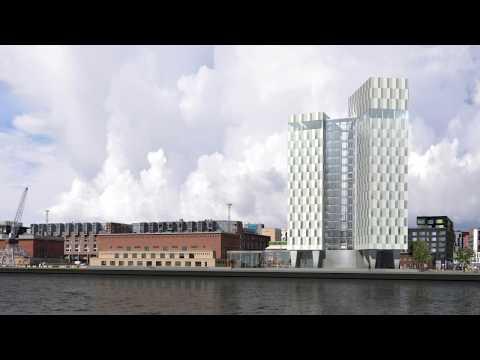